Silent storytellers, a pair of ladles hangs on my kitchen wall. Family and friends scarcely notice them with all the other distracting things cluttering the gathering space. Clutter, my identity-wrapped treasures, the never-ending project waiting attention and bane of my existence, combine to hide precious objects in plain view.

We gather here, munching or feasting, pouring coffee easily brewed in the electric pot all while threads of conversation weave around the room from several clusters of people engaged in animated dialog. It is comfortable here. The thermostat is set just right for a group. Friends open the fridge at will to find creamer or space for a sandwich brought from home. I have freshened the supplies in the necessary room. My chief concern now is what to do with all the left over cake and pie at the end of the day.

And the ladles hang silently by in the midst of this comfort and ease with a story from another time, other places. If function determines value, they fall in the category of needless, worn out, passé, disposable inventory since they have been hanging on my wall, unused for at least 20 years.

But, you see, it is the story they have to tell that holds value to me. They connect me directly to the one who stirred her stew in an iron kettle over an open fire. Rachel they called her. Her great grandfather was one of the many Palatine Germans who had been forced to leave their homelands some 80 years before she was born. There had been famine brought on by one of the coldest seasons in memory. Even a bird froze in mid air, it was said. There was ongoing religious persecution because of the Catholic-Protestant divide.  It didn’t matter which side you belonged to; the unrest and general disturbance affected everyone who wanted to live in peace. To add to the mix, the near-by French troops had made incursion after incursion, under orders to destroy everything in the land.

It was time to get out and move on. Time to take his family through the almost unbearable conditions of an Atlantic journey to the hope of a better life in a new world. Packed together like the proverbial sardines, with non-existent sanitary facilities, only the strong survived. The littlest one, just barely one year old, was buried at sea.

The leader of the family was a blacksmith in the old country; once landed, his strength helped them push on to find space and safety. After buying supplies in Philadelphia, they headed up north and west, north and west. The first homestead was rough, one-roomed and sufficient to house and comfort the family for several years, even as more babies came. But this soil was shallow and rocky; on they moved west again until, like Baby Bear’s porridge it was just right. Near Macungie and Fogelsville, in the general area of Bethlehem, Pennsylvania, they finally found rest.

Just as Abraham after leaving home for a far country built an altar for worship, so Rachel’s grandfather built a church, establishing a Lutheran congregation with another Palatinate and recent immigrant. The Jordan Lutheran Church, Orefield, PA is still a viable church, proclaiming the gospel as they celebrated 275 years of service in 2010.

Grandfather Johann did not remain a blacksmith. He tried his hand at several things, building a family business, farming, raising the best apples anywhere around and developing a distillery to make applejack which found a ready market in Philadelphia. He was always ready to move on, if not to another country, to another way to prosper. This was Rachel’s heritage: Godly, hard working, self-reliant, and ready to move on if needed. This was the air she breathed, the culture she absorbed as she grew. But she was not the only one growing in that house. There were 8 girls by now, and one lone brother. So many girls, so few suitors. This is a major problem in a society where every woman needed a husband to have a family, to be complete.

As a new bride she felt something needed to be done to help her sisters find suitable mates. Her solution? Go west!  Move on. Out there somewhere there will be husbands, sturdy men who are developing the frontier and needing wives. She then packed up a covered wagon with all the supplies they might need, and with her new husband and three of her sisters rumbled off to the unknown west. She was 28 years old.

The road situation in 1843 was rudimentary at best. Bridges? Way stops? Comfort? Not a bit. No McDonalds when hungry and tired. No Days Inn for a night’s rest. She did have her kettle and the ladles for stirring and scooping when they built a fire and hung the pot over the flames. I wonder if while cooking their meals she felt homesick for those she left behind, those she probably would never see again. They pressed on, over the seemingly endless Pennsylvania mountains. On into Ohio with its miles and miles of miles and miles. Nowhere seemed to be “just right.” Days and days. Weeks and weeks of stirring the pot over open fire.

Arriving in Indiana, there it was. The place that felt like it could become home. Somewhere near Akron they stopped, to begin life anew. They found some other settlers who had arrived just before them. “Akron was founded on July 4, 1836 by 47 settlers seeking new lands in what was then an uncharted wilderness.” She sent word back home for her brother to come join them. Her own babies came as their lives stabilized into a settled farming routine. More modern supplies were purchased and the ladles were packed away. Eventually they were handed down from mother to daughter, a visible expression of the invisible strength, determination and character of the woman who used them. She was my great great grandmother. 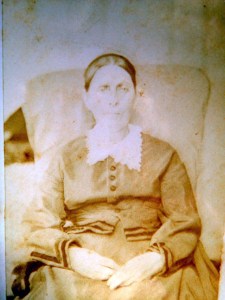 The silent ladles speak volumes. I am honored to be a steward of their story.